If you’ve been to a conference, then you’ve sat on your butt and ate all day. Every year, my work sponsors a four-day conference, and at this conference last year I managed to gain five pounds. This year, things were gonna be different. I’ve been in a weight loss competition for the past four months and I’ve lost a lot of weight. So much so that now the pounds aren’t shedding as easily, so four days of stagnant grazing wasn’t appealing.

This year the conference was in the flattest place on earth, The Netherlands, and the Dutch have taken full advantage of this. They have almost as many bike paths as they have roads, and the last time I’d been to this conference center I had noticed they didn’t have a fitness room but they had bikes for rent!

We were in Zelhem, Netherlands, where farm permeated the otherwise crisp, cool air. On my voyage, I saw more sheep than I did people. The weather was perfect: clear sunny skies and just enough bite in the air to make me thankful for my jacket and gloves. But where to go?

I started by wandering the conference center grounds, but quickly saw all there was to see and wound up on the main country road which was only wide enough for a single car (even though traffic flowed both directions). It was not exactly cyclist friendly. While driving to the conference we had passed dozens of cyclists, so I knew this was just how it was done here, but, let me put it this way: my mother would not have approved. 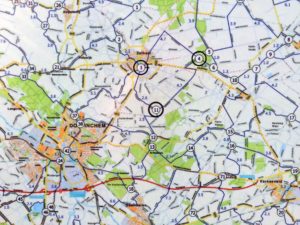 Not long into my ride I noticed a map at an intersection, but kept peddling. I somehow knew I should have stopped, but didn’t. The next two kilometers had treacherous ice in the shadows. I was alright, but that could have ended my journey in disaster. After almost a kilometer of ice there was another map, and this time I stopped. The map detailed a network of bike paths that crisscrossed the whole region. I found that the path I was on lead to nowhere since I was looking for a looped path. The loop started back at the sign I had skipped. I had to trudge through the ice again. Pay attention to the signs around you and listen to that still small voice.

Once on the trail, it was marked with little circular signs that were randomly placed high and low, left and right. Overall, it was very well done, but you really had to pay attention and stay alert. Isn’t that like life and following Jesus? 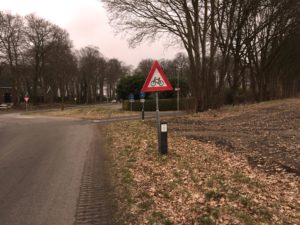 At one point I thought the sign was pointing straight up, indicating that I should keep going straight, but as soon as I passed it I saw that there was a fork in the road. Which path is the straight one? The one that seemed to veer off slightly to the left was well paved and painted. The one that seemed more straight was older and over grown. I guessed and went with the one that seemed the straightest. Along that route, I tried stopping an older couple but they didn’t understand my question, “Is this the path to Number Three?” Besides language difficulties, they didn’t know my context.  It’s kind of like asking questions of the world in how to live a godly life. They just don’t know the context. To get wise advice you must find people on the same path you’re on.

Another intersection came to a T. I didn’t see a sign, but my gut told me to turn right. Fifty yards down the road it was nagging me that I hadn’t seen a marker. By this point I was far from the conference center and a wrong turn would cost me dearly. I went back to the intersection and still couldn’t find it. I had to back up fifty yards to finally find it. Sure enough, my gut was leading me astray, left was correct. Don’t lean on your own understanding. The heart is deceitfully wicked. Trust in God’s word and godly council. Seek to please God above yourself. These are the markers in life we are to follow.

There was yet another pivotal intersection. I was in a residential neighborhood when the street seemed to come to a T again. Only this time, the arrow clearly pointed to a narrow gap in a hedge. The path it pointed to was narrow and muddy, and I was concerned that either my rented bike would get stuck or that I’d slip off the path. Nonetheless, the path was clearly marked so I followed it. Sometimes God takes us down paths that aren’t all that pleasant. God’s goal for our lives is not to entertain us or keep us happy. Often it is to show us His glory in the midst of and even despite the mire of life. It is through life’s challenges and difficulties God teaches us to depend on Him rather than our circumstances. 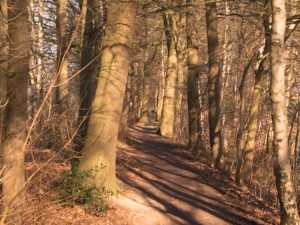 That muddy path went on forever! It was pretty and pastoral, but I was tired and thirsty. The longer it got, the more I started to doubt that I was on the right path. I was so relieved when I finally saw a marker! I learned later that at the midpoint of this long stretch there was a marker confirming the path telling me to keep going, but I was too busy complaining to see the confirmation. Had it told me to veer left or right I would have missed it completely and would have wound up completely lost. The Israelites grumbled and bickered with God, too, and wound up wandering the wilderness for forty years. The grace and mercy of God is evident when He doesn’t smite us where we stand as we complain about life’s little – or even big—problems.

God has called us to follow the path He has chosen for us. There were many paths marked on that map in The Netherlands that day. Don’t compare your path with someone else’s. Stay faithful and obedient to the path God has put before you. Stay ever on your knees, seeking His face in your heart, and expectantly listening for His voice. Stay ever in God’s Word, letting it wash and renew your mind to keep you attentive to His will. Stay connected to the Body of Christ, for it is His Bride. Sometimes we are each other’s sign posts along the path as God gives us wisdom and understanding. Finally, keep the soon return of Jesus always in view. He is our destination and prize and our reward. Heaven and life beyond this one will make these four dimensions we are so familiar with seem like a dream.