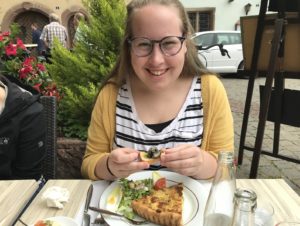 Meet Amy, one of the many interns serving with Greater Europe Mission this year. Amy recently graduated with her global studies degree and followed God’s call to use her graphic design talents with eDOT this summer. Before arriving in our little pocket of Germany, Amy and the other GEM interns arrived in Timisoara, Romania for pre-field training.

While we were in Timisoara, we would train every morning from about 9-12, and then would be able to do different things in the afternoons. The training was mostly about cultural intelligence, cross cultural communication, and preparing for culture shock. We were taught by our intern coordinator and a few different missionaries stationed in different places around Europe.

The other interns are incredible people, and it was such a blessing to train with them and keep in touch over the course of the summer. Saying goodbye at the end of the week was surprisingly emotional for all of us. I think we were all so blown away with how quickly we all became good friends, and how our unique place in life united us. When people are shaken and vulnerable, they tend to become really close really quickly because of how they have to depend on each other, and that was exactly what happened.

After arriving in Kandern, settling into her desk, and meeting the team, Amy was able to get her first real glimpse of her summer projects. Her focus will be designing graphics and logos for mobile applications – apps which will  equip people in sharing the Gospel and/or encourage individuals to grow deeper in their life with Christ.

I am encouraged to use adobe illustrator for the app, which is a really incredible program, however is somewhat foreign to me. I used it a bit in High School but not since. So I have been asking a lot of questions, and watching a lot of tutorials. Through this, I have learned a difficult lesson. I always thought that being unequipped was just where people did not have the words to say. Moses was unequipped because he had a difficult time speaking in front of crowds, and yet God provided the words to say to him, and also brought him Aaron. Through this process I have found that I am unequipped, and I should pray for God to equip me with the skills to use Adobe Illustrator. Sounds kind of silly, but there it is.

As you pray for eDOT, please remember Amy. We are thankful for the enthusiasm and joy she brings to the team. Please pray for her as she looks to use her talents for God, as she adjusts to living in a new culture, and as she looks toward the future.