Amazingly, the God of creation chooses to communicate with His fallen and corrupt creation. In the greatest act of love ever seen, He sent his Son to communicate His love for us by dying in our place, taking the punishment that we all deserve once for all. God has communicated this offer of forgiveness through every advance of technology man has devised: from the road system of ancient Rome, to Guttenberg’s printing press, and all the way to the high-speed information highway we call the internet. And God’s people have been involved at every turn looking for new ways to communicate a love so unfathomable.

Today, there are many Jesus followers, like those in eDOT, looking for ways to use the internet and other emerging technologies for God’s glory. However, these people are frequently misunderstood and overlooked. Quite simply, we’re talking about Christian Geeks. Simply put, to be a Christian is to be misunderstood (1 Cor. 2:14). In the same way, while the general public values and appreciates their efforts, geeks frequently confuse people with what sounds like Star Trek technobabble. Therefore, the Christian Geek finds himself or herself somewhat ostracized from both other Christians and other Geeks. So where does the Christian Geek go for fellowship and support?

If you’re in Europe, one answer is ICCM-Europe (www.ICCM-Europe.com). If you’re not in Europe, there are ICCM chapters on almost every continent (www.ICCM.org). This is an annual conference where like-minded, tech-savvy Christians gather to talk tech and talk Jesus, often in the same breath. 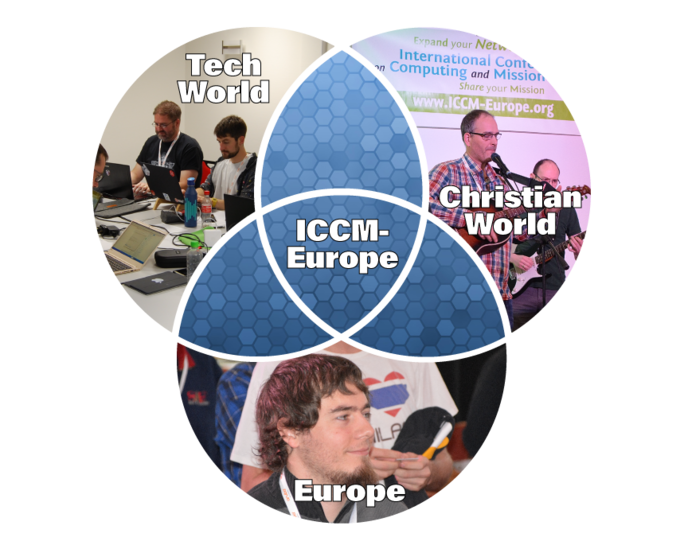 We just finished our tenth annual conference earlier this month (31 Jan – 3 Feb), and our keynote theme was “Keeping It Real” given by Mick Leggett – pastor, software engineer, and one of the original founders of ICCM-Europe. He talked about how technology keeps advancing and all the cool new shiny things that are being developed right now, while at the same time showing us that many of these things are driving us apart and isolating us. It was a sobering reminder that there are more important things in this world than the latest and greatest techno-gadgets.

Along with the keynote speaker, this year we offered a total of 15 workshops organized into five tracks.

In these workshops, we learned about subjects such as software-defined networking, big data, internet threats and countermeasures, and – from the Christian Growth track – encouragement to stop faking that you’re fine. Visit our website to read about all 15 workshops. In addition to these workshops, we had two optional pre-conference all-day workshops. These were a one-day hackathon and a leadership seminar.

There’s a lot more to an ICCM-Europe conference than just the keynote and workshops. Every year we have ad hoc round-table discussions we call BOF sessions (Birds Of a Feather) and a contest where attendees are encouraged to present the past year’s greatest accomplishments – and failures. We even have something called Prayer Pals where we break into small groups to get to know and pray for each other.

As you can see, ICCM-Europe is a packed three days, running from dinner Wednesday night to lunch on Saturday. We haven’t even mentioned all the snacks and meals and board games and other things that naturally happen when like-minded Christian geeks gather together. It really turns into a refreshing retreat where people can feel relaxed and understood enough to just be themselves.

We were in Germany for this past conference but we’re already looking forward to next year! We’ll meet February 6-9, 2019, at the De Betteld conference center in Zelhem, Netherlands.

You might be asking what eDOT has to do with all of this? This year our fearless leader – Courtney – chaired the planning committee, handled the outgoing communication to attendees, led the Leadership Seminar pre-conference workshop, and played the role of MC during the conference. Miette processed the registration applications, managed all of the hosting logistics for the conference, and helped lead one of the workshops. Jeff managed the online registration system, website, and schedule, as well as helped Courtney with some of the MC duties. Dana led some of the morning devotions, oversaw the Christian Growth track workshops, and functioned as on-site pastoral care. Jacob gave the rest of the morning devotions, spoke at three workshops, and played comedian during What’s Hot, What’s Not  – a fun time where we look at the current tech trends. With every point listed here, there are a dozen unmentioned. As you can see, this was an all-hands-on-deck event for eDOT that was handled professionally and smoothly.

We wanted to thank you for partnering with us to enable all of this ministry to happen. Sixty-five Christian tech professionals – many of them missionaries and ministers in their own right – were blessed and encouraged because you are standing by our sides, lifting us up in prayer, and financially making this possible. Because you have obeyed God with the income He’s given you, you have strengthened the frequently overlooked and forgotten geek Christians of Europe! You have made a lasting and resonating impact that is still reverberating in a dozen countries and, through the internet, the world! Thank you!