Exploring the Pathways: The Cairn Path 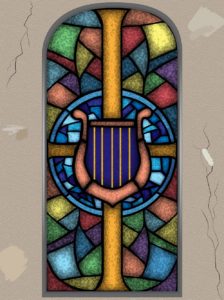 eDOT is currently in development of an app [Soul Connection] designed to help people get the most out of the time they intentionally spend with God. GEM encourages every employee to take one day every six weeks or so to get away from the normal routines of life and spend time with God in whatever way they connect with Him most. Because many people aren’t sure how they connect with God most, the Soul Connection app was designed to help people find their connection point. These various connection methods are called “Pathways”, and within each Pathway are multiple “Paths” for exploring your relationship with God.

I was asked if I would consider testing one of the Paths for the app which involved building a “Cairn” as a memorial to God – as God told Joshua and the Israelites to do. The idea is that it would serve as a reminder for all of the things God has done and is doing in my life that is worthy of praise. Cairn is one of the Paths under the Worship Pathway.

As I was walking home, the day before I was planning on building a Cairn, I saw some smooth rocks that looked to be of a perfect size and shape for a Cairn, so I collected them and brought them home with me. As I was carrying the rocks home, I began to think about a good place for my Cairn. I thought about a place that has both good and bad memories for me and decided that that is where I wanted to build the memorial.

Since I knew this place had some bad memories for me, I wanted to gather some rougher rocks to go with the smooth rocks I had already gathered. I felt God was telling me that He wanted to claim this place and the difficult memories for Himself. After finding some rough rocks, I walked up to the spot where the memorial would be built and sat down on a bench and read through the pathway as described in the app. 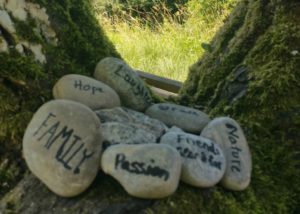 The tough words were easier to come up with. They readily flowed through my head and rose to the top of my consciousness. Instead of getting caught up in the negative, I prayed that God would take that memory and redeem it, and I praised Him. Praising God for tough things is never easy, and it definitely wasn’t at this moment either. The first word that was written was “loss.” How was I supposed to praise Him for the losses in my life? And yet, that was why I was there. I prayed for wisdom as to how He used the loss in my life. Even in the “loss,” the “loneliness,” I knew I needed to praise Him.

The other words, the happy words, they were in my mind too and I wrote things like “family,” “friends near and far,” “passion,” “nature,” and “laughter.” I didn’t have to spend long thinking of why these were praise worthy, but I did take a moment with each rock and thanked God.

After writing all the words that came to mind, I gathered the rocks and placed them in the crook of a tree. In a place where I think they could stay, but also in a place that wasn’t only for me. As the Israelites built for future generations, my Cairn was built so that other people may will walk past, see the stones, take the time to read them and add their own. But even if they don’t, even if I go back and the stones are gone, that memorial was built for me to worship my God and remember all that He is doing and has already done for me.