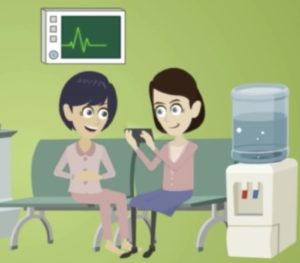 The C2C (Creation to Christ) Story App was created by the eDOT team a few years ago and it’s designed to be a Gospel bridge, a way to move from a secular conversation to a spiritual one. We don’t always know when people use our resources, so we really appreciate the feedback whenever someone lets us know that one of our tools was used and was useful. We love to hear the stories of how God is using the apps and resources that we have developed to help build His Kingdom. Fran, one of our GEM missionaries in Cologne, recently led someone to Christ using the C2C Story App. Here is her story:

A few months ago, Fran was sitting in a coffee shop in Cologne with one of her students, giving an ESL lesson (English as a Second Language). There was a man sitting at the next table, drinking his coffee but NOT minding his own business. He was clearly eavesdropping on the English lesson. Fran recalls that anytime she would make a joke with her student, this other man whom she calls “Starbucks Guy” would smile knowingly. After she wrapped up her lesson and her student left, Starbucks Guy immediately struck up a conversation. He started asking her spiritual questions, and they ended up talking for 4 hours. She asked if she could meet with him the next day to give him a few Christian books and a copy of the New Testament. He agreed to meet, and the following day the two of them chatted for another 4 hours about everything from politics to religion and everything in between. She asked to meet again, but this time it took a few months for them to reconnect.

After several months, they were finally able to get together. At this third meeting, Fran brought one of her other GEM colleagues along. The two tried to engage Starbucks Guy in spiritual conversation, but he seemed less willing to join in this time, making jokes rather than having a serious discussion.  Finally, Fran told him that there was something she wanted him to look at and listen to. She got out her cell phone and pulled up the C2C Story App. Using her head phones, she had Starbucks Guy listen to the captions and scroll through the images. She said it took 3 hours for him to go through the whole story from start to finish. After every few lines, he would pause, ask a question and then Fran would answer. It seemed like he really wanted to understand what this story was about.

When he finally came to the end, Fran looked at him and asked him frankly: “So, do you want to accept Jesus into your life?” He responded simply: “Yes, I do.”

Fran seemed surprised for a second, then she told him that this was great news. Her colleague prayed with Starbucks Guy and he accepted Christ. Fran said that he is planning on getting baptized and he wants to invite his parents, who are non-practicing Muslims.

Please pray with Fran and this new believer that the Holy Spirit would continue to work in his life and help him grow in his new relationship with Jesus. Pray also that his family would hear the Gospel and choose to follow Christ.

The C2C Story App is free to download for both iOS and Android devices.