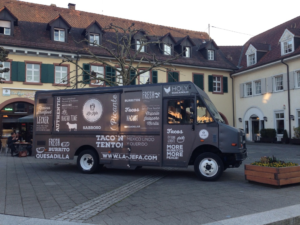 In Germany, festivals, celebrations and even market days are accompanied by food vendors selling a variety of local beers and bratwurst. And they are good and expected. Beer and brats are staples of the culinary appetite in this part of Germany.

Earlier this week we had our “Spring Market” in town, and the usual variety of vendors came to sell their specific wares. Accompanying these vendors were the usual food vendors. Except that on Tuesday, a new food vendor also arrived in town: the Burrito / Taco truck.

Ironically, this Mexican food vendor had been warned that he might not do well in the town, because this area of Germany tends to be very traditional. It was an exceptional risk for the vendor to come, not knowing whether there would be a market for Mexican food.

Chuckle. Little did the vendor know! This town has a large population of Mexican-food-deprived-North-Americans. The Burrito / Taco truck had been spotted as it entered town on Monday evening to prepare for the market day on Tuesday. Monday night, the local FaceBook page was abuzz with the news and anticipation of a good Mexican food option during the market day.

By noon, business was hopping at the truck. North Americans turned out in mass to enjoy the cuisine offered by the Burrito / Taco truck. And it was GOOD MEXICAN FOOD! Offered by La Jefa (http://www.la-jefa.com), the food was authentic and could be seasoned to taste. By 4:30PM, the vendor was sold out (the market closes at 6PM). We believe they were glad they came, and several Germans who had eaten from this vendor also expressed their thankfulness that the Burrito / Taco truck had come to the market.

There are already calls for the truck to return regularly. Some in the community have suggested that a weekly appearance by the Burrito truck would not be too often. We’ll see. Even once a month would be a great variety from the usual offerings of food.